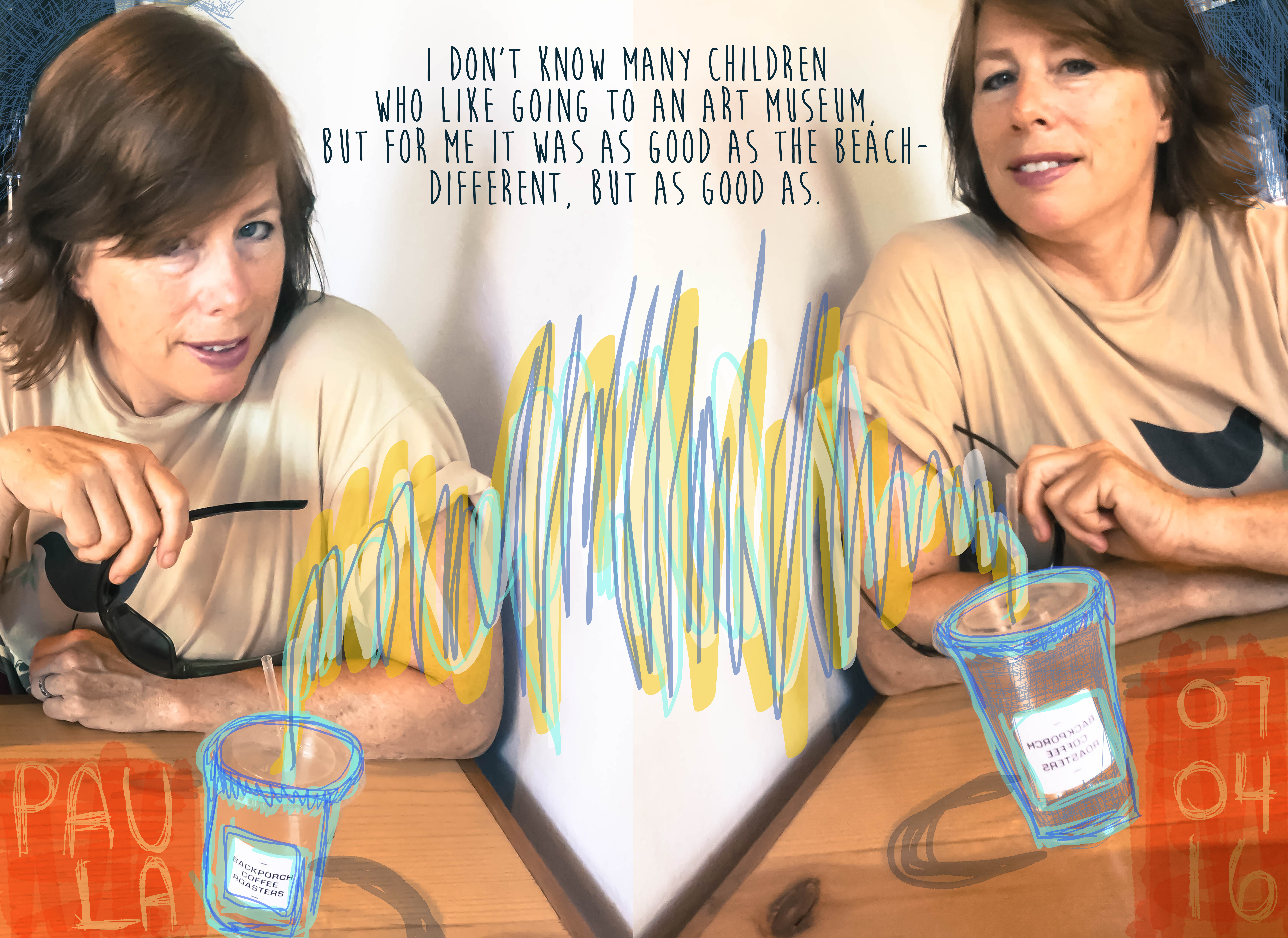 With Art in general— to experience other people’s Art is a whole new way of seeing and opening up doors— feeling the expansiveness of experience. Curiosity and Art are very linked— the whole idea of “what if”, “what about this” , “why not this?” All the possibilities are open. Without Art the world just seems set and closed.

As a kid— I remember feeling there is regular life and then there is going to the museum in San Fransisco. And it was like “Wow! Look at these paintings, look at what these women are wearing. Look at the color! And this amazing space! And columns!” Who ever saw columns in Northern California? This wonderful old museum. It was always a special day if we went to San Fransisico to do this. I just loved it. I don’t know many children who like going to an Art museum, but for me it was as good as the beach- different, but as good as. It was magical. Very theatrical.

I am drawn to people— figurative work. It was like I was watching plays that I could make up the dialogue for. Very inspiring, in many ways like fairy tales. I loved reading fairy tales as a kid so seeing wonderful paintings reminded me of fairy tales I had read about. It was a special way of communicating from a famous artist down the years to us— many years later, maybe 100 years later. Like Egyptian tomb Art— its amazing it has lasted this long and we can see it and hear their stories, what they were trying to communicate and share what was important to them.

I think everyone should have some Art in their life some way by either looking and enjoying it or doodling or whatever they do.

I think I kept trying to suppress being an artist. Even though my mom is an artist, she really tried to steer us away from doing it ourselves, because you can’t make a living at it. I was weak-willed, I guess, so I went into English literature and then I went into Foreign Currency Banking out of college.

It was in college I started photography, because I had a roommate who was a photographer. I was dabbling in it and kept thinking “Oh, I can’t do that” and finally, I was 23, I had done the foreign currency job for a year and I hated it, so I said, “Im going to go to New York and be a photographer. That’s it!”

Luckily, because I was raised with this idea to never say can’t, I moved to New York. I didn’t know anyone there, I had no connections. I went to Art school for a semester and then I dropped out because I heard from everyone that you just become an assistant. So, I was an assistant photographer for about two years and then I started getting my own jobs, because I was very focussed. Extremely focussed in a way I could get hired to do it. I separated it from Art, because I thought “It’s commercial Art because I’ll get hired to make pictures.” That way I was in a safer place. I didn’t know much about making Art and trying to exhibit it. I still don’t know much about that world in New York. I thought it was somehow easier to get magazines to hire me. In time, it worked out quite well and I was able to make a living.

I was still too intimidated to draw or paint, because I thought, “Well, I’m not trained.” And I thought you had to be trained to do that. I had great respect for that training and I knew it took time to paint or draw well.

Once I had kids I knew I had to do something. So, Violet was turning one and I wanted to make a birthday invitation and invite people to the party. I thought, “Let me get out my oil pastels and mess around.” And that was it! From her being one until now— now she is 16— I have been obsessed with drawing and painting and re-learning that.

I decided to play it safe and to get a degree in Arts education because I knew I needed to work. So, I went back to school for that degree and— of course— to take that degree you had to take one class in every discipline. Ceramics, jewelry— everything. I took about three painting classes and really just found my place.

When I first started doing it I wanted to paint people, but I couldn’t because I didn’t have that skill. I knew I needed that skill and I wanted that skill. Before when I painted, in my 20’s and stuff, I would paint mostly swirls and flower like things and stripes— fun, right from the tube, thick paint, no mixing. This time, I kept coming back to the figure, using my photographs to paint from. I kept trying and trying and trying until I got to what I liked. And I liked it very much. And that’s what I still do. I don’t do paintings without people.

I wish society supported it more. I wish Art wasn’t this tiny little bit in the bigger picture. I think it should be the main thing. People aren’t raised to have respect for real art. I think every one should have drawing lessons all the way through school up through high school. What a great thing to have to help focus your mind. It just gets dropped around 6th grade and you’re lucky to get one class between graduation and 6th grade.

The mark that is common to every great civilization that disintegrated is that Art was lost. They were just focussed on war, like Ancient Rome— eventually all their energy and money went to war. Once the Art is gone a culture is on the downhill. I’ve worried that is what is happening to us.